Join 641 employers that have already made the pledge

Crunch explain the benefits of a living wage

Crunch has been paying its staff a living wage from the day we set up, back in 2009. We recently decided to add our support to the Brighton & Hove Living Wage Campaign, because we feel the living wage could help not just individuals, but businesses and, ultimately, society as a whole. Here’s why.

The amount of people who would benefit from a wage increase is quite staggering. A study in 2014 by The Resolution Foundation found that, if the living wage was enforced, over five million workers would see their wages rise. This represents an additional £6.5 billion in gross annual earnings across the population.

Paying the living wage provides many benefits to employers as well as employees. As a knock-on effect of increased staff happiness, businesses will benefit from:

There’s real evidence for all these benefits. Since adopting the living wage in 2009, KMPG have reported increased staff satisfaction levels, resulting in the business becoming more efficient. They said that during the first year of implementation, turnover in cleaning staff dropped from 44% to 27%, with absenteeism also dropping by 10%.

It’s a sad fact that the UK has more low-paying jobs than most countries in the OECD. A report by the Resolution Foundation shows that 21% of all UK workers were low paid in 2011, giving the UK a share of low pay more than four percentage points higher than the average across OECD countries with available data. 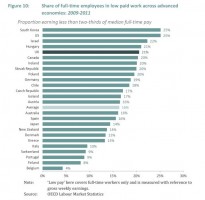 To put this into perspective, workers in Britain are twice as likely as counterparts in Italy (10%) and five times more likely than employees in Belgium (4%) to earn below the low paid threshold.

Redressing this imbalance would hugely benefit the economy, giving people more disposable income, allowing them to consume more goods and services. Higher wages also means higher tax profits for HM treasury. The Resolution Foundation estimate that £3.6 billion in savings could be made per year if workers were paid the living wage – that’s enough to pay statutory sick and maternity pay to the whole country.

What you can do

If you’re a business owner, you can help by committing to pay your employees the living wage. We realise that this might not be an option for all small businesses. Fears remain that the costs of implementing the living wage are unaffordable and could lead to a loss of employment, hindering development and growth.

This being said, a 2013 survey by the Federation of Small Businesses (FSB) found that almost half of small firms already pay all their staff at, or above, the living wage. If this is you, you have nothing to lose by becoming a living wage employer today. Visit the Living Wage Brighton & Hove website to sign up.

Written by Nick Chowdrey. To find out more about Crunch, please visit http://www.crunch.co.uk/.