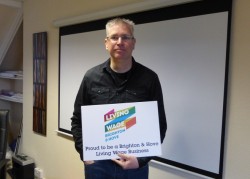 Edward Lowton, a recent graduate of Brighton Journalist Works, interviews Chris Palk, Managing Director of DabApps, to find out why he signed up to the Brighton & Hove Living Wage Campaign.

Tell us about your business, when did you set up the company?

DabApps is a software development agency that develops web and mobile applications. A client will contact us with an idea and we’ll help them create it in whatever way they want to do it.

We started about five years ago on a part-time basis, with just myself and the two other directors. Then over the following two years we evolved so that the three of us were working full time. In the last three years we’ve grown from just three people to the twelve people we employ today.

What attracted you to Brighton?

I came to Brighton when I was 18 to study at university. I was attracted by the nightlife and the beach. I moved away to London for a while but I always wanted to come back to Brighton.

Do you think Brighton is a more affordable city than London?

While I think Brighton is a slightly more affordable city than London, it’s still expensive and has got more so in the five years since we started. Wages here are lower compared to London and in most respects that’s alright because I think the cost of normal lifestyle things and going out is less. However the cost of accommodation has certainly risen.

What made you decide to join Brighton & Hove Living Wage Campaign?

We have always paid our staff above the living wage since we founded the company, before we joined the campaign. We felt it was important that people were paid a wage that they could live on rather than struggling to try and get through each week. We actually pay most of our staff a fair bit more that the living wage, we have a number of talented people working for us and it makes sense to pay them the wage that they deserve.

Do you think that paying the living wage has had a positive impact on your staff?

I think it helps our staff to know that we’re a fair employer, for that reason we also try to give a fair amount of holiday time and training opportunities, to try and ensure that they see us as an employer who cares about them. We see the living wage as part of a wider ethical employment package that we can offer our staff.

It’s definitely been beneficial and I think it helps us attract new employees. It has also helped us retain staff and we haven’t had anybody leave since they’ve joined us. We had two people on short-term contracts but nobody’s actually left to go elsewhere and also we have very low sickness rates.

It’s a good idea – if you treat your staff fairly the benefits will feed back into the business. If you’ve got the right staff then you should be able to afford to pay them the living wage, after all it’s not much more than the minimum wage and when you’ve got good staff that are happy, you get a lot back.