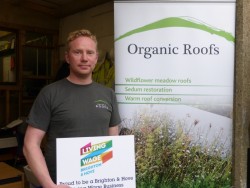 Edward Lowton, a recent graduate of Brighton Journalist Works, interviews Lee Evans, Managing Director of Organic Roofs, to find out why he signed up to the Brighton & Hove Living Wage Campaign. Organic Roofs is a Brighton based company that provides design advice, installation and maintenance for green roofs.

Tell us a bit about your business, how did Organic Roofs come about?

I started the company in 2011, I used to be an academic at the University of Sussex and I retrained as a carpenter. I quit academia as I wanted to do something that was practical I suppose. I found myself on a weekend green roof course, I didn’t know anything about green roofs at the time but I thought it looked fun. Now I teach the same course for Brighton and Hove Permaculture Trust.

We were established as a limited company from the start and we’ve been growing ever since. There are now five of us in the office and I pay eight installers.

We’re based in Brighton but we undertake projects nationwide, our projects here have included the Velo Café and also the Richardsons Yard project with Brighton Housing Trust, a development which used refurbished shipping containers as a basis for flats. We’re also in discussions with Brighton & Hove City Council about how to improve the city’s green infrastructure.

What are your thoughts on the living wage?

If your business needs to pay people less than they need in order to survive, it’s not really a sustainable business. It’s a basic principle of economics and ethical business.

I think the argument in favour of the living wage is clearer for small businesses as they are closer to the people they employ and are answerable to their own conscience. It’s not just a load of figures on the wall or numbers on a page.

Do you think that paying a living wage has a positive impact on staff?

I know from firsthand experience when I was training as a carpenter that when you were on those jobs and you weren’t getting what you thought was fair there’s a big disengagement from your work. That’s why we try to pay generously – I want people to feel like they’re getting a fair rate for the work that they do.

In that sense paying the living wage has been beneficial to us, it’s about the quality of the engagement; their sense of job satisfaction follows through into the service we supply.

Some businesses argue that they would need to make staff redundant if they paid them the living wage. What’s your opinion on this?

Everyone has to make their own decision but the main thing is, in your assessment of whether or not a business is viable the baseline ought to be – is everyone getting paid enough to live? If they’re not then what’s wrong with your business model?

What would you say to other businesses thinking of joining that campaign?

I would say “Why haven’t you joined already?” – it’s as simple as that really.